SPSS was developed to do most major types of data analysis using SPSS. The software was originally created by three Stanford graduate students in the late 1960s. The acronym “SPSS” initially stood for “Statistical Package for the Social Sciences.” As SPSS expanded their package to address the hard sciences and business markets, the name changed to “Statistical Product and Service Solutions.” In 2009 IBM purchased SPSS and the name morphed to “IBM SPSS Statistics.” SPSS is now such a standard in the industry that IBM has retained the name due to its recognizability. No one particularly cares what the letters “SPSS” stand for any longer. IBM SPSS Statistics is simply one of the world’s largest and most successful statistical software companies.

SPSS mainly uses two windows: the data editor (this is where you input your data and carry out statistical functions) and the viewer (this is where the results of any analysis appear). There are several additional windows that can be activated such as the SPSS Syntax Editor, which allows you to enter SPSS commands manually (rather than using the window-based menus). For many people, the syntax window is redundant because you can carry out most analyses by clicking merrily with your mouse.

Once SPSS has been activated, a start-up window will appear, which allows you to select various options. If you already have a data file on disk that you would like to open then select Open an existing data source.

Functions of the various features in SPSS 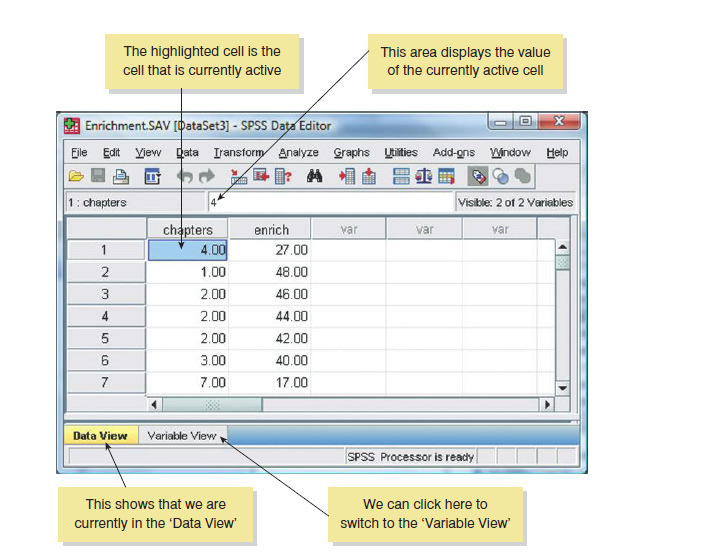 File: This menu allows you to do general things such as saving data, graphs or output. Likewise, you can open previously saved files and print graphs data or output. In essence, it contains all of the options that are customarily found in File menus.

Transform: For example, you can use recode to change the values of certain variables (e.g. if you wanted to adopt a slightly different coding scheme for some reason). The compute function is also useful for transforming data (e.g. you can create a new variable that is the average of two existing variables). This function allows you to carry out any number of calculations on your variables.

Defining Your Hypothesis in SPSS

Taking our Productivity example that we might generate the following hypotheses:

Null hypothesis: Men will not score higher than women with respect to productivity.

Why You Should Learn SPSS Advanced Analytics From Lagos Data School

Hi, How Can We Help You?